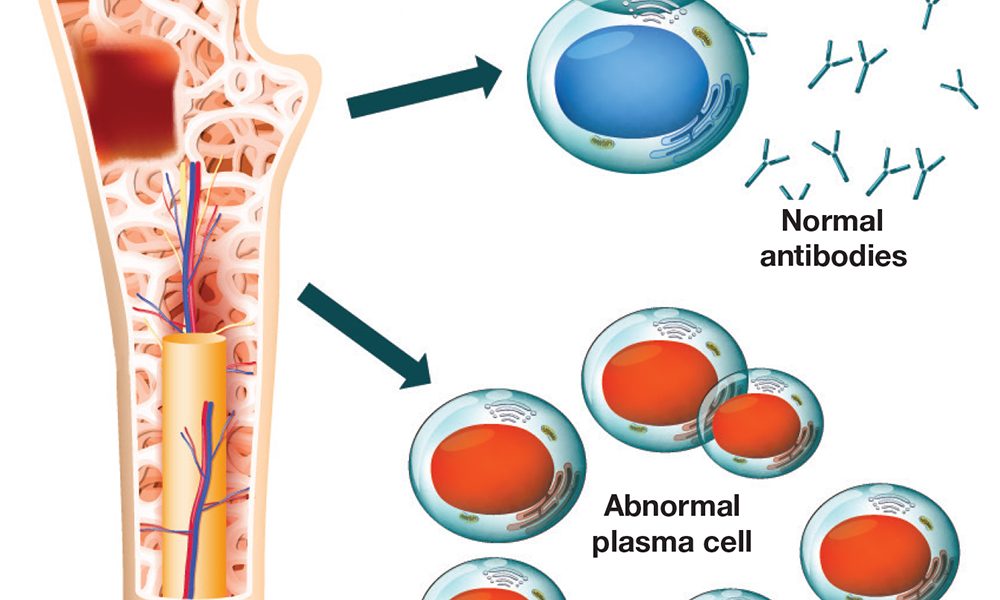 Multiple myeloma is a cancer that forms in a type of white blood cell called a plasma cell. Healthy plasma cells help you fight infections by making antibodies that recognize and attack germs.

In multiple myeloma, cancerous plasma cells accumulate in the bone marrow and crowd out healthy blood cells. Rather than produce helpful antibodies, the cancer cells produce abnormal proteins that can cause complications.

Signs and symptoms of multiple myeloma can vary and, early in the disease, there may be none.

When signs and symptoms do occur, they can include:

It’s not clear what causes myeloma.

Doctors know that myeloma begins with one abnormal plasma cell in your bone marrow — the soft, blood-producing tissue that fills in the center of most of your bones. The abnormal cell multiplies rapidly.

Because cancer cells don’t mature and then die as normal cells do, they accumulate, eventually overwhelming the production of healthy cells. In the bone marrow, myeloma cells crowd out healthy blood cells, leading to fatigue and an inability to fight infections.

The myeloma cells continue trying to produce antibodies, as healthy plasma cells do, but the myeloma cells produce abnormal antibodies that the body can’t use. Instead, the abnormal antibodies (monoclonal proteins, or M proteins) build up in the body and cause problems such as damage to the kidneys. Cancer cells can also cause damage to the bones that increases the risk of broken bones.

A connection with MGUS

MGUS, like multiple myeloma, is marked by the presence of M proteins — produced by abnormal plasma cells — in your blood. However, in MGUS, the levels of M proteins are lower and no damage to the body occurs.

Factors that may increase your risk of multiple myeloma include:

Complications of multiple myeloma include: What is Myelodysplastic syndromes ?